Maslow was a psychologist who proposed a hierarchy of needs. He categorised the needs as, a) physical needs that consist of need for physical well-being like food, water, clothes for protection from heat or cold and physical safety such as house, etc. b) social, psychological and emotional needs, that is, need for social recognition, inclusion, love, etc. and c) self-actualization, that is, realizing one own’s potential. Maslow believed that all human beings want to achieve self-actualization; hence move up the hierarchy of needs, and before a person could move to higher level, he has to master/satisfy his needs in lower levels. The hierarchy is shown in the figure below.

His premise was that as basic needs would be met with, the person would grow and develop social needs and finally go in for self-actualization. Subliminally he was referring to different classes in the society. A daily wage worker would be more worried about fulfilling his physical needs than social needs or self-actualisation needs as compared to a billionaire who has left all the insecurities behind him and now can work on what he actually enjoys and would help him achieve his potential. One of the examples is so many workaholic billionaires who work not because they have to earn a living but because that’s all they enjoy or find meaning in their life.

In life, every person is a discreet individual with his own needs; these needs may cut across the hierarchy (as proposed by Maslow). The priorities and needs of a person may change over a period of time depending on age, income levels and personal growth. Our behaviour and desires may express multiple needs at the same time. For example, when a person eats at a Michelin Star restaurant, is he fulfilling his physical need to eat or his esteem need or his desire to eat delicious food? Similarly, what needs does Ferrari fulfil? A person can be seen as someone with multiple needs, and these needs overlap with each other. 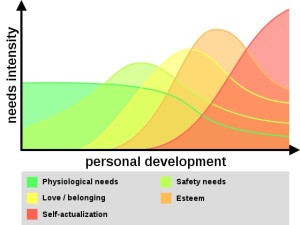 Every person has all the needs but the intensity of needs may change. For example, level of physical needs changes with earning levels of a person. People get used to a lifestyle and may feel insecure if lack of money may lead to decline in standards of lifestyle. The definition of what is essential or necessary changes from a person to person.

As the person grows rich or in stature, his insecurities may reduce and make him aim for self-actualization while contrary to expectations a person may also give up money for self-actualization. India has seen many spiritual Gurus, e.g. Prince Siddhartha, also known as Gautam Budh and Lord Mahavira who, though born in royal households and destined to be kings, gave up everything to find true meaning of life.
Maslow’s assumption that everyone would want to move up the need triangle is debatable and has been questioned. But for HR teams, it can be a good framework to understand profile of its personnel. It would help them in following ways:
– In designing incentive systems
– To define the profile for recruitment, but most importantly
– To shape the culture of their organisation.

Most firms design an incentive schemes that are mix of cash and recognition. For example, incentives most organisations have cash rewards, ESOPs or cash bonuses for their employees. The top performers may be additionally incentivised or rewarded with CEO’s or President’s Award, paid holiday tours abroad etc. These awards address primarily the physical and social needs. Rewards and incentives for top performers are aimed at esteem needs.

A founder who wants to develop a software development team or an ad agency that delivers high quality work, may want to hire a bunch of passionate persons and give lot of autonomy to the team(s). Same will be true for a band of scientists say who are working in basic research or cutting edge technologies. An example of it is Academic world, where most people are internally motivated and are provided lot of autonomy. They set their own targets, determine their own research and in some cases also decide on their research associates or assistants. Academic institutions are also characterised by less inter-dependency and hence allows for individual excellence. Things change in business world, where a person is expected to work with others.

Some of the ways of developing work places where employees could aim for self- actualization could be
1. Remove hygiene factors. Presence of hygiene factors, takes people away from their work. It works as a road block in cultivating ownership amongst employees. Some of the key hygiene factors are
a. Money or Salary – The discontent in salary emanates from comparisons within and outside of the company. Most employees triangulate their salary based on their personal needs, salary levels in the industry and salary levels within the company especially within their own band. A mismatch in salary that the employee expects and the company provides becomes single most important reason for disgruntlement. A salary lower than what other colleagues are getting is seen as “I am being valued less”. This affects the esteem of the employee as well. We at Srijan followed Open Salaries to minimise this discord. (https://rajneeshrastogi.wordpress.com/2015/06/23/open-salaries/)
b. Democracy – Excluding people from decision making process or not being heard or grievances not being addressed is another reason for employees to feel less valued. Create an organisation where people can speak up if they have a problem or if they want to contribute. This would address the issue of hygiene factors. Create an environment where people can speak up without fear of losing job for criticising. Let them share their disagreements be it with strategy, colour of wall paper or the quality of coffee.

2. Recruitment and induction –
a. Hire passionate people-Let people come and work in the company for free for a week. See if they enjoy the work. Let them make an informed choice. Get a feedback from the colleagues on them.
b. The behaviour of people reflects their passion, their needs, their beliefs and assumptions. Most people are looking for jobs and careers but they stick to work places/ companies where most of their needs are met with. People may blame their bosses, lengthy or excessive work hours or lack of growth opportunities but the underlying cause would be unfulfilled needs or unhappiness with something. So the one week spent in office would also help colleagues understand the candidate/person. A feedback would help from the colleagues would help in understanding if the candidate would fit into the organisational culture.

3. Staff Interactions – HR/ Founders can design company in a way that allows/ facilitates interactions between staff to fulfill their social needs e.g. seating the whole team together in open work spaces without cabins and cubicles fulfils social needs such as need for inclusion. This also facilitates communication and reduces information asymmetry between team members. Structuring organisation around team would also help. (https://rajneeshrastogi.wordpress.com/2017/03/18/building-football-teams-at-work/ )

4. Allow people to experiment. Allow people to fail but do not tolerate mistakes – Most organizations are so focussed on success that they just build on their formula that made them successful. The managers and the company fail to experiment as they are afraid of failures. Let people experiment and learn. Takes failures in strides. The behavior in small and medium sized family owned companies is a good example. A father, who is grooming his child, is tolerant of Child’s failures. He would allow him to experiment and fail. But unfortunately he would not be as charitable with his employee. No wonder the son takes ownership, but the manager does not.

5. Devolve decision making to teams – One of the surest way of promoting ownership is devolve decision making. Responsibility without authority has no meaning. The senior management should devolve planning, implementation and control to lower rungs of management. This would give them autonomy and control over their operations. Teams develop their own sub-culture and help people bond, collaborate, cooperate and hence learn and grow. Essentially fulfill their social and self-actualization needs.

In a competitive world which is changing very fast, organizations need people who take pride in their work and own it. The traditional model of seeing employee costs as zero sum game is not going to be effective. HR departments will have to go beyond traditional roles and responsibilities and would have to add creating organizational culture to their job descriptions. Creating work spaces where people can achieve their full potential would be one of it.